You are here: HomenextProjectsnextThe Fabric of our TownnextOnline ExhibitionnextThe Swaisland Block Printers Dispute and the Chartist Campaign for the Vote.

The Swaisland Block Printers Dispute and the Chartist Campaign for the Vote. 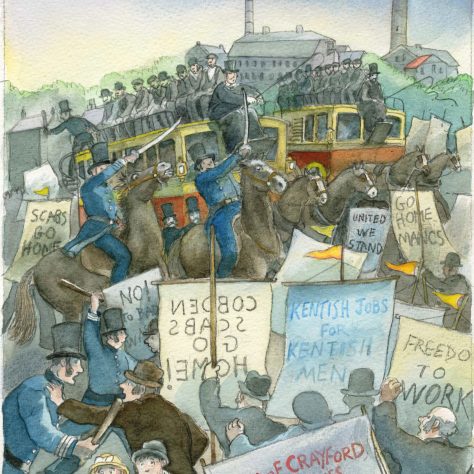 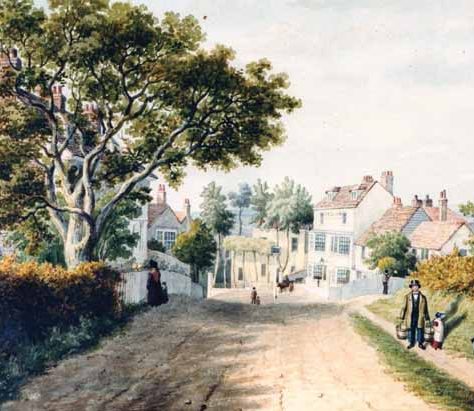 The One Bell from Old Road.
Watercolour by William Hubbard, c.1845.

Lose nearly half of your wages or lose your job! This was the ultimatum which faced the employees of Swaisland and Evans more than once in the 1840s and 1850s – due to several bad harvests and a downturn in trade. Membership of any trade union was also threatened. Trade improved a little in 1844 but there were still concerns among the men, so Edmund Stallwood, of The Northern Star, was invited to come to The One Bell in Crayford where “the large clubroom was exceedingly crowded”, to explain the need for The People’s Charter.

A terrible trade depression through 1846 led to Swaisland and Evans asking the workers to take pay cuts to keep both firms going. A further cut in June 1847 was too much and a strike was called. After a bleak Christmas, the men were forced back to work but still participated in the mass Chartist demonstration at Kennington in April 1848.

During the bitter strike of 1852 strike breakers were sent down from Lancashire by Charles Swaisland’s friend and fellow factory owner Richard Cobden. These new men were required to sign a contract. Some attempted to return home and were brought back for trial at Dartford Magistrates Court where they were convicted under the Master and Servant Act and sentenced to hard labour in Maidstone Prison.

The Chartist’s spirit carried on and eventually all but one of the six points were secured.