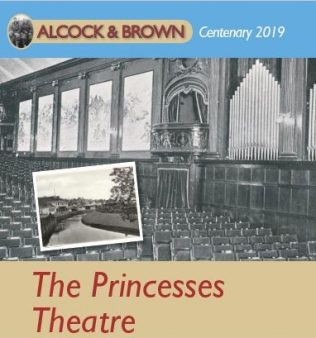 The Princesses’ Theatre, situated beside the River Cray, was first opened on 26 of July 1916 by Princess Christian. It had been built by Vickers to provide entertainment for its workers but unfortunately the theatre was demolished by a fire on 4 of December 1916.

The theatre was rebuilt and on 23 of July 1919, it was reopened by the Duke of York (later King George VI). During the evening, a short film was shown about the Alcock and Brown flight.

After the film finished the announcement was made “Ladies and gentlemen, I give you Sir John Alcock and Sir Arthur Whitten Brown!” They walked onto the stage and were greeted by Sir Trevor Dawson (Managing Director of Vickers) who presented them with gold watches, as a symbol of their achievement.

Alcock and Brown thanked Rex Pierson (the designer of the Vickers Vimy), Sir Trevor and the Vickers workers.

It was a significant event in the history of the theatre, and of Crayford, and was celebrated in the Sidcup Times which called Alcock and Brown “Knights of the Air”.