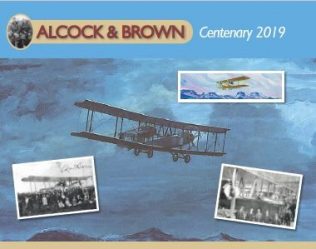 On 1 April 1913, Lord Northcliffe, owner of The Daily Mail, offered £10,000 to the first pilot that could fly nonstop across the Atlantic. They were allowed 72 hours and had to finish in the same aircraft in which they started.

A plausible incentive may have been self-promotion, raising his newspaper’s profile. However, a more likely motivation could have been to encourage technical innovation in the field of aeronautics.

A few months before he offered it, the Australian government had offered £10,000 for a race from Australia to London. Therefore with other places in the world encouraging new advancements, Northcliffe may have felt compelled to follow suit.
Due to the disruption of the First World War, the first attempt at the prize was made in April 1919 by the Short brothers; their Shamrock plane flew only 12 miles before crashing into the sea.

On 18 May 1919, the second attempt was made by Hawker and Grieve. They had to be rescued by a ship in the Atlantic. Just one hour behind was the Martinsyde Raymor but it crashed on take-off.

The Berlin Bomber and the Vickers Vimy were the final two contenders left to embark on the challenge. After mechanical difficulties concerning the Bomber, Alcock and Brown’s Vimy was the only remaining aircraft to take on the feat.