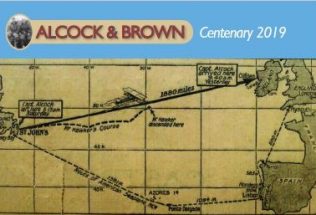 The momentous flight took place on 14 and 15 June.
Alcock and Brown waited in Newfoundland until a break in the bad weather, then took off, whilst their opponents were still carrying out checks.

With fog obscuring their vision, and Alcock battling strong gusts of wind, they noticed their generator’s propeller had sheared off. They now had no electricity for the radio or their heated waistcoats. To make matters worse, a piece of the exhaust had split and fallen away from one of the engines which was making a terrible clattering noise.

Even verbal communication was now impossible.
After about eight hours, they climbed to 6,000 feet where Brown was finally able to calculate their position.

The added altitude led them into turbulent weather which caused the plane to stall and plummet towards the sea. At less than 100 feet above the ocean, they regained control and found they were facing the wrong way. Once they had corrected their route, the weather turned again; it began to snow, obscuring the petrol overflow gauge, a clear view of this being essential to avoid carburettor problems.

Several times, Brown had to stand up in the slip stream, and clear the gauge, while Alcock kept the aircraft steady to prevent Brown being thrown out. After 16 ½ hours and nearly 1900 miles, mostly flying blind, the west coast of Ireland was sighted. They landed near Clifden, nose down in a bog, but happily neither man was injured.