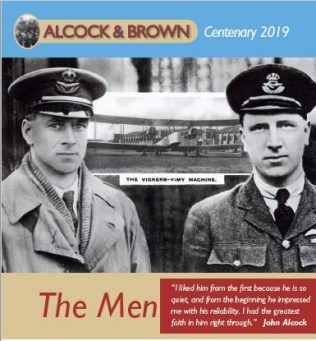 John Alcock was born in 1892 in Manchester, England.

He first became interested in flying at the age of 17. He gained his pilot’s license in November 1912. He was a regular competitor in aircraft competitions. During the First World War he served as an RAF pilot.

Arthur Whitten Brown was born in 1886 in Glasgow, Scotland.

He began his career as an engineer before the outbreak of the First World War when he joined the army then the Royal Flying Corps as an observer, later training to become a navigator.

Both men were captured during the First World War, Alcock while he was in Turkey and Brown while in France by the Germans. After the war Alcock wanted to continue his flying career and took up the challenge of attempting to be the first person to fly directly across the Atlantic.

Alcock and Brown first met by chance at the Vickers Weybridge/Brooklands site, when the attempt was being discussed. Alcock was impressed when he first met Brown, whose ability as a navigator far exceeded his own. Brown was assigned to the attempt alongside Alcock.