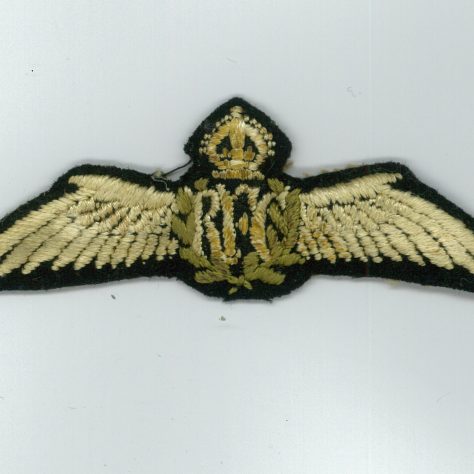 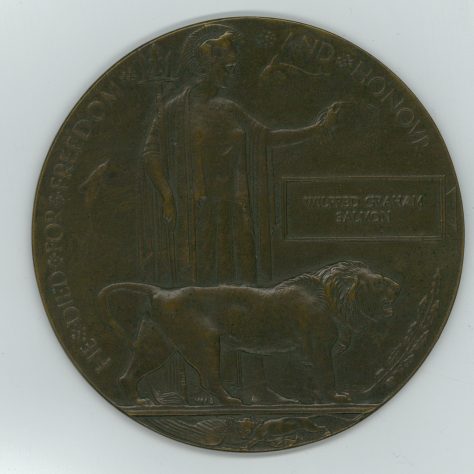 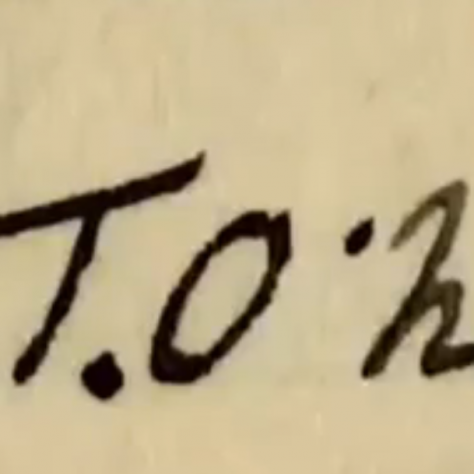 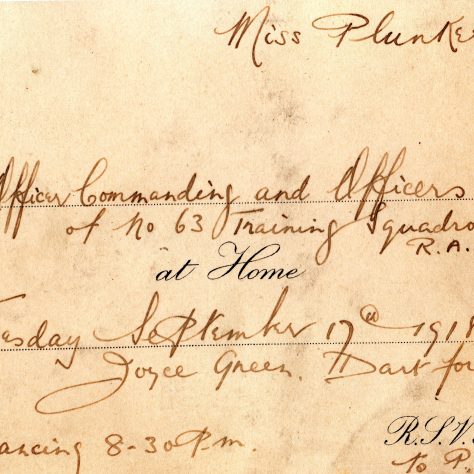 Dance Invite to a Miss Plunkett from 63 Squadron at Joyce Green 1918
Peter Daniel. 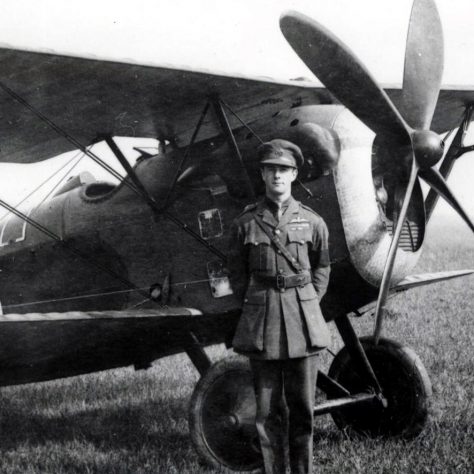 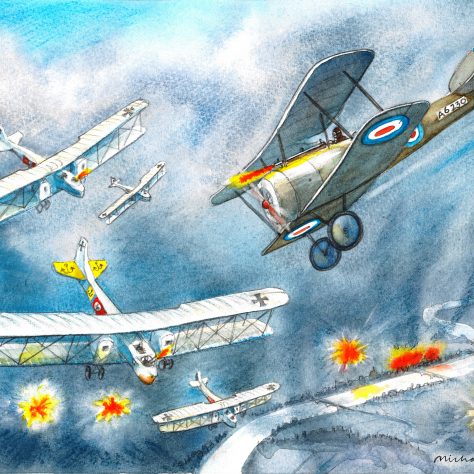 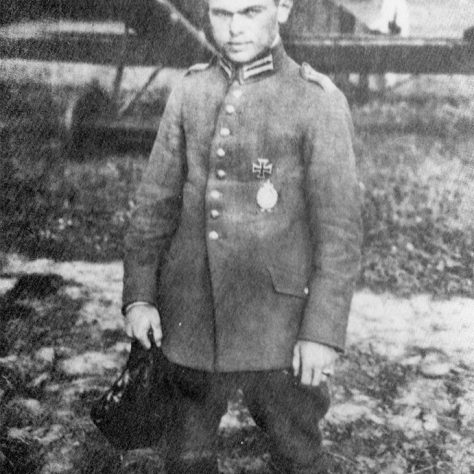 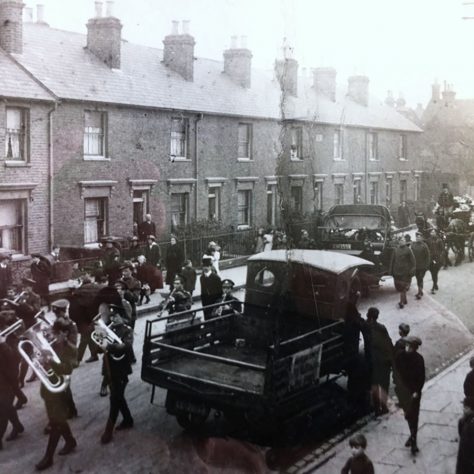 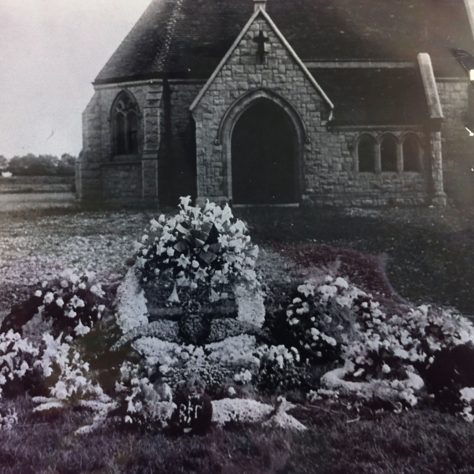 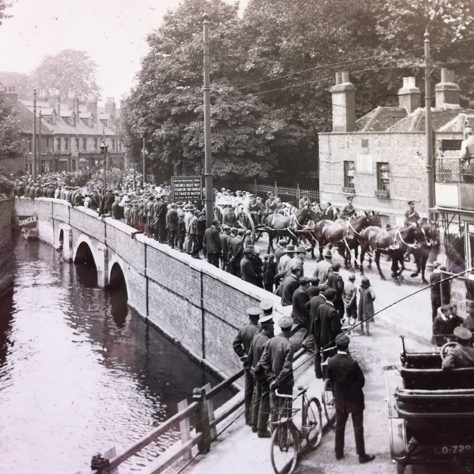 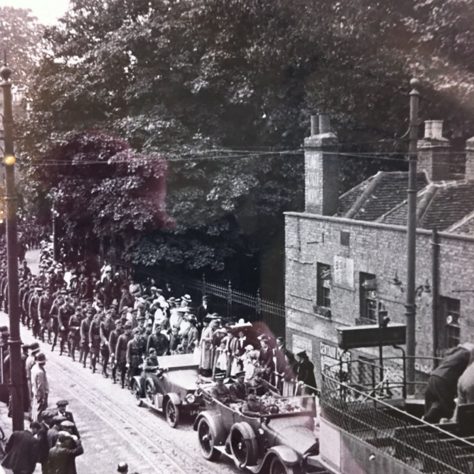 After the horrific death of his best friend Norman, Wilfred Salmon (“Wiff”) endeavoured to join the Royal Australian Flying Corps, but it was full. However, he found he could resign from the Australian army to join the British Royal Flying Corp on November 9th, 1916.

After initial training, Wiff found himself posted in May 1917 to 63 (Training) Squadron RFC, Joyce Green, Dartford.  The airfield had a notorious reputation due to its surrounding hazards.  It was situated where the Thames was at its widest, bounded on one side by the Vickers munition works, and on the other by three hospitals and a power station.

However, Joyce Green’s proximity to London made up for these dangers.  Wiff’s instructors included legendary ace Captain James McCudden and Captain Hermann Von Poellnitz (actually from Sidcup!). Both men regularly organised jaunts up to the West End. After one such trip, trainee Edward “Mick” Mannock (later a great ace) competed with McCudden over a chorus girl named Teddie O’ Neill, the latter winning her affections by adorning his aircraft with her name and taking her up on unauthorised flight. The squadron also organised regular dances at the airfield to which they invited nurses from the local hospitals.

Wiff’s arrival at Joyce Green coincided with the first daylight raid on London, by Gotha IV bombers on June 13th, 1917. The attack caused widespread anger when 162 people were killed, including 18 children in a primary school in Poplar. Wiff was in the air during this raid, but was unable to attack them. He vowed it would never happen again.

On 7 July 1917, London was attacked by 22 Gotha bombers, which bombed the East End and City – in all 57 people were killed. Wiff took off in single gunned Sopwith Pup A6230 to intercept the returning bombers, each of which carried 2/3 machine guns. Wiff fired 55 rounds from his gun, but was strafed by Offizierstellvertreter Rudolf Klimke’s Gotha, who later claimed Wiff’s Pup as a victory.

Wiff had received his wings only three days earlier and was at this stage still attached to his training squadron.  He expended all of his ammunition before being shot through the head by one of the heavily armed German aircraft.  Struggling to remain conscious Wiff attempted to guide his damaged aircraft back towards the airfield where he was dashed to earth.

The wreckage in Slade Green was raided by souvenir hunters, who stripped away parts of the plane (and Wiff’s goggles and gloves). The Pup’s petrol tank had been punctured and emptied by a bullet. Wiff was taken to the Orchard (Australian) Hospital, but died from two gun-shot wounds to the head and a fractured skull.

His aerial exploits had been witnessed by thousands of people, who later lined the streets for his funeral at Holy Trinity Church, Dartford.  Led by his brother Jack, hundreds of Australian and British soldiers and munition girls from Vickers took his coffin to Watling Street Cemetery. It was claimed he was the first man to die in action defending London since the Norman Conquest.