You are here: HomenextHistoriesnextArchives and artefactsnextUnderwater Exploration of the Association by diver Richard Larn

Underwater Exploration of the Association by diver Richard Larn

In June 1967, the HMS Puttenham sailed to the Isles of Scilly and dropped anchor off Gilstone Ledge, where the crew found the remains of Sir Cloudesley Shovell’s ship, the Association. Later that year, two more teams joined the expedition – the Blue Sea Divers and Roland Morris’ Divers. More than 2,000 coins and other artefacts were recovered from the wreck site. Over the next 20 years, 12,000 more gold and silver coins and important artefacts were discovered. These artefacts were auctioned off to private collections and museums, or were kept by the divers. Those displayed give a broad picture of the everyday items found on a Royal Navy ship.

Piece of Association’s pulley system made of lignum vitae. This wood known as the ‘tree of life’ is as hard as iron and never rots. Its sap self lubricated the ship’s pulley wheels.

Copper bolt from the pulley system

Copper nails from the Association

Ring dial or pocket sundial belonging to a sailor on the association. Nobody had an accurate means of telling the time aboard. 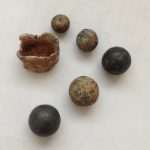 Musket and pistol balls, and a gunpowder measure for a pistol.

Piece of eight minted in 1688 at Potosi (notice P) in Bolivia. This was one of the largest Spanish silver mines. So much silver was mined that Pieces of eight soon became the international currency.

The reverse of the above image.

Brass buckle from an officer’s Bible

Edmund Mortimer’s personal seal. Edmund was one of the Association’s Midshipman. This was a position often taken by young members of the gentry training to be officers.

A brass wing nut from the Association. The Divers were surprised to find this at the wreck site as they were not commonly used at this time.

Coins from the monarchs Shovell served

A well preserved skull discovered on the Gilstone.

Divers with Coins recovered from the wreck site.

A canon found among the wreckage of the Association. The inscription on the canon means “One Master Thomas Pit is commissioned by to make ____ in the year 1604.”

A different view of the same canon.

Coin including pieces of eight encased in ‘crud’

Another canon from the Association.

Comments about this page