The Legend of Hengest Musical Show

Song 1 Saxon Ships Speed Acros the Sea
Legend of Hengest Song about Saxon War band of Hnaef Hocing
Song 2 Help We Need the Romans
The Romans have left and the Britons desperately want them back
Song 3 The Saxons Pict Busters
When the Britons had problems with invading Picts who did they call...the Saxons!-Hengest and Horsa
Song 4 Three Ships came Raiding
Legend has it that Hengest and Horsa arrived in three ships at Ebbsfleet, Kent in 449AD
Song 5 Here I Come A-Wassailing
King Vortigern of the Britons falls in love with Hengest's daughter Rowena over the traditional Saxon Wassail cup
Song 6 Over the Hills and Far Away: The Battle of Crecganford
Hengest commands and we obey at the Battle of Crecganford. This is an adaption of an 18th century British Army marching song.
Song 7 Hengest was a Warrior
This song adapted from a Napoleonic sea shanty tells the story of the close relationship between Hengest and his brother Horsa up to Horsa's death at Aylesford.
Song 8 We are the Saxons: Eu Nimet Saxas
This song was used for Hengest's return after defeat in Thanet and the treachery of the Night of the Long Knives at Stone Henge
Song 9 Over the Hill and Far Away: Hengest's Death
The finale of the Hengest show arrives when Eldol gains his revenge for the Night of the Long Knives and beheads the captured Hengest. This song isslower sadder version of Over the Hill and Far Away. 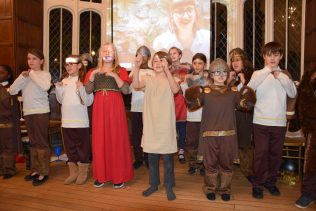 Children from CRAY worked with MOD Theatre Group at an after school club held at Holy Trinity CE Primary School from September to December. They learnt about the story of the legendary first Saxon settler of Kent Hengest and performed a musical show at Hall Place, Bexley, on 5th December 018